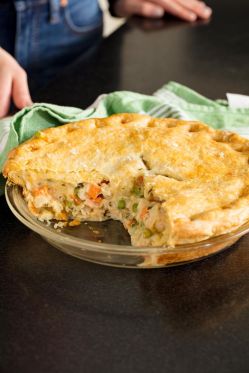 This pot pie was so hearty and delicious. I made it in a pie tin but I could also see using individual ramekins. I used my lard pie crust recipe and it really pushed it over the top.

Preheat the oven to 375. Prepare the crust following my lard pie crust recipe and chill while the filling is being prepared. In a large pot over medium heat, melt butter. Add onions and carrots and cook until vegetables are beginning to soften, about 10 minutes. Stir in garlic, then stir in flour and cook until the flour mixture is golden and beginning to bubble. Gradually whisk in chicken broth. Bring mixture to a boil and cook until thickened, about 5 minutes. Stir in heavy cream, cubed chicken, peas, parsley and thyme. Season mixture with salt and pepper. To assemble the pie, on a lightly floured surface, roll out one disc of dough into a large round about ¼” thick. Place in a shallow pie dish then add filling. Roll out second disc of dough into a large round about ¼” thick and place on top of filling. Trim and crimp edges, then use a paring knife to create slits on top. Brush with egg wash and sprinkle with flaky sea salt. Bake pie until crust is golden, about 45 minutes. Let cool for at least 15 minutes before serving.