I gave my younger son a waffle maker for Christmas and started researching waffle recipes, I was surprised to learn that the key to making fluffy waffles is to separate your eggs and whip the whites.  The extra effort is truly worth it, I promise. Recipe and photo courtesy of ohsweetbasil.com

In a bowl, whisk together the flour, baking powder, baking soda, cornstarch, sugar and salt. In another bowl, whisk together the eggs, buttermilk and heavy cream. Using a wooden spoon, stir the wet ingredients into the dry ingredients until a few streaks of flour remain, but the batter is almost mixed together. Add the butter and stir until just combined. Important!! Allow to rest for 15-30 minutes. Heat a waffle iron. Brush butter on both sides of the waffle iron. Pour about 1/3 cup onto the iron and cook per instructions. 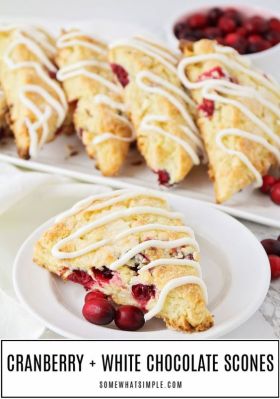 I found this recipe in a Taste of Home magazine and decided to challenge myself. I’ve had scones at Starbucks before but never attempted to make them myself. It turns out that my husband loves scones, which neither of us would’ve guessed before now. This is one of the few things I’ve made that he ate til they were gone, so they are definitely a keeper.

Preheat your oven to 400 degrees and line a baking tray with a baking mat or parchment paper. Place flour, sugar, salt, baking powder and cubes of butter into a large bowl and rub the butter into the flour with your fingers until you have a coarse breadcrumb texture. Some pea sized lumps of butter is fine. (I was using frozen butter so I grated mine with a cheese grater.) Add the white chocolate chips and cranberries and stir very briefly to evenly distribute. Place the eggs and 1/2 cup heavy cream into a bowl and beat lightly with a fork. Add the egg mixture into your flour mix and stir gently, until a soft, crumbly dough forms. You want it to hold if you press the dough together, but not be sticky and wet. If the mixture is still too crumble, add in the extra cream, 1 tablespoon at a time. (I live at altitude and added 2 tablespoons and probably could’ve added one more.)  Tip the dough onto your prepared baking tray and press into a large disc, around half an inch thick. Use a sharp knife or pizza cutter to cut the disc of dough into 6-8 wedges. At this stage you can leave the scones cut but together, or use a spatula to spread the scones around the baking tray with a 2 inch gap in between each one. Sprinkle some white sugar onto the top of each scones and then place in the oven for 13-17 minutes. (I left mine in a round for about 14 minutes because my mixture was pretty crumbly, then I separated them and baked for about 5 more minutes. You’ll know they are done when they are risen, golden around the edges and sound light when you tap on the top. 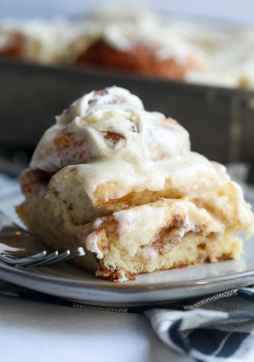 Shelly, from the website cookiesandcups.com, has become by go-to for easy, delicious recipes. This cinnamon roll recipe is so so good, and because it uses rapid rise yeast, it takes the intimidation factor out of making yeasted breads/rolls. Just mix all the ingredients in the bowl and let rise for an hour (it really is that easy even though the instructions look long)! I will definitely be making this recipe Christmas morning. Recipe and photo courtesy of cookiesandcups.com.

In the bowl, of your stand mixer fitted with the paddle attachment mix together 2 cups of flour, sugar, yeast, and salt on low speed until combined. Place the water, milk, and butter in a microwave safe bowl and heat in 25 second increments until the temperature reaches between 120°-130°F. Butter might not be melted, completely, which is fine. Add this to the flour mixture along with the egg and mix on medium speed for 2 minutes. Add 2 more cups of flour to the mixture, and mix on high speed for 2 minutes, scraping the sides of the bowl if necessary. Turn mixer to low and add in just enough remaining flour until the dough will form a ball. Lightly flour a clean surface knead the dough for 6-8 minutes, adding a little more flour as necessary while you are kneading until the dough is smooth, elastic and springs back when lightly pressed with 2 fingers. Alternately, you can do this step in your stand mixer fitted with the dough hook attachment. Cover the dough with a towel and let it rest for 10 minutes. In a medium bowl mix together the sugar and cinnamon for the filling. Set aside. Roll the dough out on a lightly floured surface into a 15×10- inch rectangle using a rolling pin. This doesn’t have to be exact. Spread the soft butter onto the rolled out dough evenly. Sprinkle with the cinnamon sugar mixture. Starting the with long sides, tightly roll up the dough, pinching the seams to seal. Using a knife, slice into 12 equal pieces. Line a 9×13 baking dish with parchment paper and coat with nonstick spray. Place the cinnamon rolls evenly into the pan, cover with a towel and allow to rise for 1 hour in a warm place, until doubled in size. Preheat oven to 350°F. Bake cinnamon rolls for 25-30 minutes, or until golden brown. Cool on a wire rack for at least 20 minutes. Prepare frosting in the bowl of your stand mixer fitted with the paddle attachment. Mix the butter and powdered sugar together for 1 minute on medium speed. Add in the milk and vanilla and mix for another minute until creamy and smooth, scraping the sides of the bowl as necessary. Spread frosting onto rolls.

Recently my husband asked me for a blueberry dessert and then coffee cake so I found this recipe for the best of both worlds! This recipe is so delicious and would be a wonderful item to serve on a Sunday morning. Recipe and photo courtesy of serenabakessimplyfromscratch.com.

Preheat oven to 350 degrees. Butter a 9″x13″ and line with parchment paper, butter parchment paper. For the crumb topping, mix together brown sugar, flour and cinnamon. Cut in using a pastry cutter or mix in using a mixer 6 tablespoons cubed butter until crumbly. Set aside. For the cake, add 3/4 cup cold butter to mixing bowl and beat until smooth and creamy. Slowly add sugar while beating at medium speed until light and fluffy. Add eggs one at a time beating well between each addition. Scrape sides of bowl between each egg. Then add vanilla and mix well. Batter should look light and fluffy. Add baking soda, baking powder and sea salt. Beat on medium-high speed until well combined. Scrape sides of bowl. Stir in flour 1 cup at a time alternating with 1/2 cup sour cream mixing on low speed until just combined being careful not to over mix. Continue until all of flour and sour cream is added. Hand stir in blueberries until evenly distributed. Spread half of the cake batter into the bottom of prepared pan and spread to the edge. Swirl cinnamon crumb topping with a knife into cake batter. Spread 1/3 of of the Brown Sugar Cinnamon Crumb over the batter and cover with remaining blueberry cake batter. Press brown sugar crumb topping between fingers to form crumbs and distribute evenly over the top of the cake. Bake for 50-60 minutes or until a toothpick inserted into the center of cake comes out clean. Allow cake to cool before serving.

This. Bread. I can say with the utmost certainty that this banana bread is the best I have ever tasted. It is the right amount of sweetness with a hint of crunch from the pecans and the perfect balance of banana flavor. I have tried many many different banana bread recipes and this one takes the prize. While the recipe called for 1 9×5 loaf, I split mine into two 8×4 loaves, which allowed them to cook all the way through, without overcooking the exterior. Recipe and photo courtesy of myfrugaladventures.com

Preheat oven to 325 degrees.  Add flour, baking soda and salt to a small bowl and set aside. Mix egg, sugar and oil and stir until well combined Add the dry ingredients to the wet and stir well. The mixture will be thick and dry. Next add milk, vanilla and bananas and stir until incorporated. Mix in walnuts and pour into a loaf pan or pans depending on what size you want. Cook 50-75 minutes, checking regularly until a knife comes out clean.

I had some strawberries that I needed to use in my fridge, and what better way than in a yummy muffin.  The addition of the sour cream helped make these super moist and delicious. Recipe and photo courtesy of thelittlesouschef.com.

For the Streusel topping:

Preheat the oven to 375.  Line muffin tins with 18 liners. Dice strawberries into small pieces.  Pour flour, sugar, baking powder, salt and cinnamon into a medium bowl. Whisk together.  Pour melted butter, sour cream and vanilla into a small bowl, then add the eggs. Whisk together until smooth.  Pour sour cream mixture into the flour mixture.  Stir together until combined. Add 1 1/2 cups diced strawberries and stir until combined.  Divide batter into the muffin cups.  Evenly sprinkle the 1/2 cup remaining strawberries over the tops of the muffins.  For the streusel, soften butter in a small bowl, add remaining ingredients  and stir until mixture comes together, then sprinkle over the muffins.  Reduce oven temperature to 350 and bake for 20-25 minutes.

I love, love, love this recipe.  It is so easy, and it is great to serve to a crowd.  One of the best things about Pioneer Woman’s recipes is that they make even the most daunting tasks (making gravy) very doable.  If it’s just my family of four I make a 1/2 batch of biscuits, but a full batch of gravy so I can freeze half of it to have later on down the road. Recipe and photo courtesy of The Pioneer Woman.

Preheat oven to 400 degrees. Add flour, baking powder, and salt to the bowl of a food processor (or a large bowl.) Add butter pieces and pulse until butter is completely cut into the flour mixture (or use a pastry cutter if using a bowl.) While pulsing (or stirring) drizzle in the buttermilk until dough just comes together and is no longer crumbly. Drop in clumps on two baking sheets, then bake for 15-17 minutes, or until golden brown. (Optional: Brush with melted butter when biscuits first come out of the oven.)

With your finger, tear small pieces of sausage and add them in a single layer to a large heavy skillet. Brown the sausage over medium-high heat until no longer pink. Reduce the heat to medium-low. Sprinkle on half the flour and stir so that the sausage soaks it all up, then add a little more until just before the sausage looks too dry. Stir it around and cook it for another minute or so, then pour in the milk, stirring constantly. Cook the gravy, stirring frequently, until it thickens. (This may take a good 10-12 minutes.) Sprinkle in the seasoned salt and pepper and continue cooking until very thick and luscious. If it gets too thick too soon, just splash in 1/2 cup of milk or more if needed. Taste and adjust seasonings. Spoon sausage gravy over warm biscuits and serve immediately!